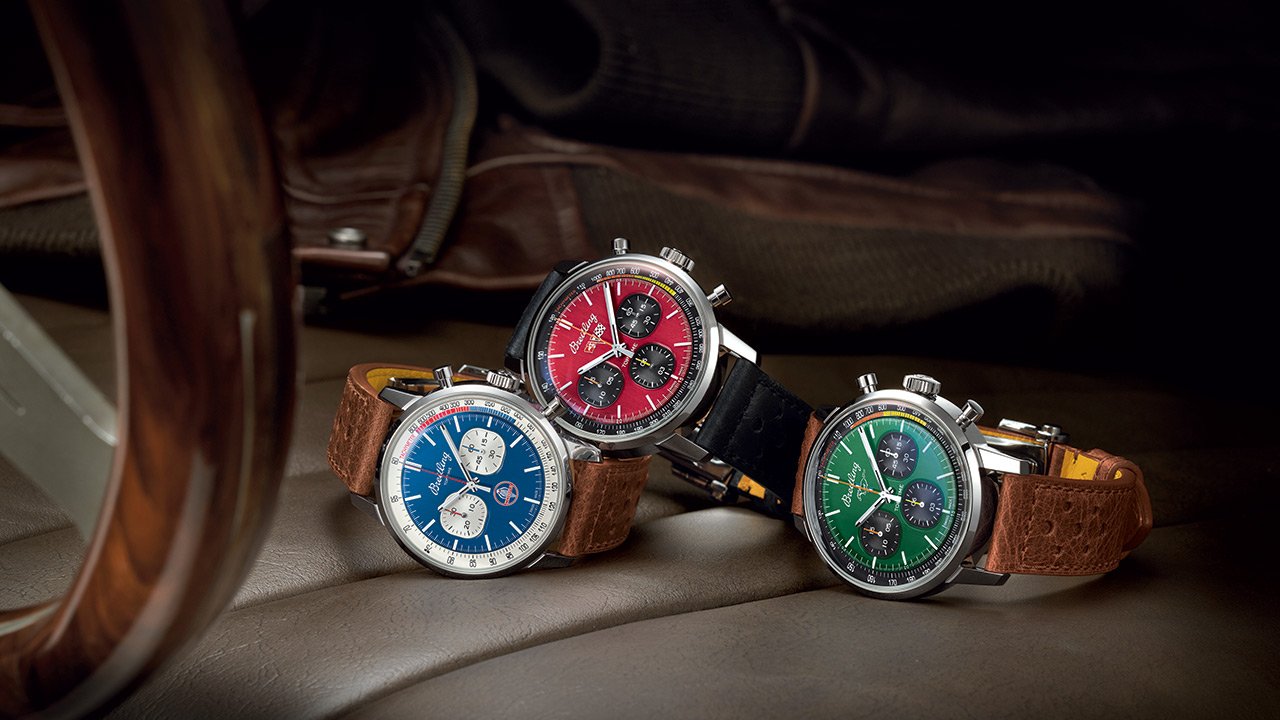 For the latest iteration of its Top Time Collection, Breitling draws inspiration from three iconic muscle cars to give it a touch of classic motoring. Although it may not be quite prominent, the relat....

For the latest iteration of its Top Time Collection, Breitling draws inspiration from three iconic muscle cars to give it a touch of classic motoring.

Although it may not be quite prominent, the relationship between cars and watches has a sense of common cause between the two, and it has been so for as long as cars have existed. And, perhaps, that’s why you often hear how creators in each field draw inspiration from products of the other – if you have a penchant for either car or watches or both, that is. For example, we often hear in design briefings of new cars that the detailing of the car was inspired by a new watch or the ethos of a particular watch brand. Similarly, many watchmakers seek inspiration in automobiles, particularly automotive racing, for their products. And then, there are custom timepieces designed to fit into cars as a natural accessory – Breitling’s tourbillon for the Bentley Bentayga comes to mind – but that’s a path so rarefied that only the richest of the rich dare to tread on it.

The inspiration
The lineage of the Top Time collection can be traced back to the 60s. It was during this time that Breitling conceptualised the line-up as for young, active professionals. In its current avatar, it’s targeting a similar audience who are fond of watches and classic muscle cars. The choice of cars is also quite interesting – all three cars are from the early 60s, a time that can rightly be called the golden age of muscle car culture.

The most recognisable of the three cars – well, at least, in terms of pure numbers – would be the Gen 1 Ford Mustang, which created sales records that no one thought possible. That even today the Mustang remains one of the most recognisable models in the world speaks volumes about the kind of appeal it has.

Matching the iconic Mustang is the Top Time Mustang chronograph, featuring the same green (the dial) and brown (the straps) combination of the car. The dial also features the Mustang’s galloping horse logo, along with three sub-dials finished in black, offering a nice contrast to the dominant green of the dial. The watch also features a tachymeter scale and an engraved Mustang logo on the case back. Similarly, the Top Time Corvette chronograph is based on the C2 Corvette, which was an iconic design in the world of muscle cars. Popularly known as the Stingray Corvette, it is a highly sought-after model in the world. Given that the car was particularly popular in red, the watch also features a red dial and a black strap. In this piece too, the sub-dials are finished in black, and there is a tachymeter scale and a Corvette logo on the case back. Both Top Time Corvette and Mustang feature a 42mm case and are powered by the Breitling’s Caliber 25 movement, providing a power reserve of 42 hours. The movement is also COSC certified for accuracy.

The third watch in this lineup is perhaps my favourite of the three, partly because it’s based on the most extreme muscle cars of the trio – the AC Cobra. The Cobra has a rich and interesting history, which couldn’t have been possible if it was not for legendary American racing driver Carroll Shelby. For it was he who spotted the potential of the British built AC’s chassis and imported them into America and used them with big, powerful American V8 engines to create a colossus of a muscle car, which dominated not just roads but also racetracks the world over. Featuring a bright blue dial with white highlights, mimicking the Cobra’s iconic blue with white stripes paint scheme, the 40mm case of the Cobra cuts a fine figure, and the brown straps balance its great aesthetic appeal. Powering the Cobra is Breitling’s Caliber 41, with a 42-hour power reserve.

In most fields across the world, including the world of watches, right now, heritage designs are all the rage, and Breitling has designed an impressive range of watches, with design elements inspired by a period of great significance in the history of automobiles, which certainly deserves a look if you’re a watch or/and car aficionado.

Next Article: Stars of GPHG 2021
© Copyright XiteTech 2023. All rights reserved.