Samsung has been trying hard to get back its dominance in the smartphone market. We have seen the company adopt several strategies, and as a result it has started to see some traction. As per a report by Counterpoint Research, the Galaxy S10 Plus was the top-selling flagship smartphone by Samsung in 2019. The shipment of the ultra-premium smartphones, which includes the Galaxy Note10+ (Review), also grew by 24 per cent YoY. The South Korean giant has now moved a step further in its pursuit of outshining OnePlus, which currently holds the top spot in the premium segment. Samsung recently launched the Galaxy S10 Lite and the Galaxy Note10 Lite and we got our hands on both the devices. You can read the review of the Galaxy S10 Lite later but below is what we think of the Note offering.

Before we take a deep dive into what the smartphone offers, let’s take a quick look at its specifications. The Samsung Galaxy Note10 Lite sports a 6.7-inch Super AMOLED Infinity-O display. It is powered by an octa-core Exynos 9810 mobile platform, which is flanked by up to 8GB of RAM and 128GB of onboard storage. At the back, there is a triple camera system consisting of a wide angle lens, an ultra-wide one and a telephoto lens. All the sensors are 12MP. Samsung is calling it ‘Pro-grade camera’ setup. On the front is a 32MP front camera, and the phone has a 4,500mAh battery. The phone also sports a 3.5mm jack.

Samsung had to cut corners in order to make the device affordable. As soon as you hold the Galaxy Note10 Lite,you will notice that the phone is quite different from its ultra-premium sibling. The corners are rounder and the body feels a bit bulkier than theNote10+. Blame Samsung for treating us with marvellous panels on its smartphones, the display on the Lite version is not as impressive as you would expect from a Samsung handset. You don’t get the curved display and all-metal and glass built. It sports a triple camera setup in a square module on the top left corner of a plasticback panel.

When compared with the segment leader and the closest competitor OnePlus 7T, the Galaxy Note10 Lite falls short on overall design. You will not have the flagship-level feeling of the smartphone. BUT the company does not aim to please you with the smartphone’s specs. Samsung told XiteTech that its priority is to bring flagship-level experience in an affordable device. So, once you start using the phone on a day-to-day basis, you’ll understand that the smartphone hits the right chords with performance, software and camera. Also, there’s a 3.5mm headphone jack!

Even though Samsung has used an older chipset, it doesn’t fall short on performance. The basic thing that needs to be understood here is the interaction of the device with the user. I reviewed the Galaxy Note10+, and you will notice a little difference in the performance, and user experience between the Plus and Lite models. The main reason behind it is the software optimisation, and more-or-less the same features that are being offered in the ultra-premium model.

Although the image above is scaled down, you can still see Thor, Captain America, Doctor Strange, Falcon, Black Dwarf, among others.

The phone’s volume and power buttons are on the right edge, and there is an in-display fingerprint sensor. The punch-hole display is vibrant and is one of the best displays you can get in this price segment. The shows, videos on YouTube and other content is a treat for the eyes. We watched Avengers: Endgame to test the contrast, colour vibrance and clarity of the display. We could clearly see the action in the scenes which were shot in low light. We were easily able to distinguish between the characters in the ultra-wide shots of the final battle in the movie.

As mentioned, Samsung has equipped the Galaxy Note10 Lite with last year’s flagship processor. While this may not go down well with smartphone enthusiasts and gamers, there is nothing that this smartphone cannot handle. We played the usual games like PUBG Mobile, Asphalt 9 and Call of Duty: Mobile, and did not face any problem. In fact, the display enhances the overall mobile gaming experience.

The Galaxy Note10 Lite offers the best camera performance in its segment. We tested it against the OnePlus 7T (Review) that has a similar camera setup. We found that the photos were better in the Samsung offering. When clicked in the ultra-wide mode, the photos clicked with the OnePlus 7T lacked clarity. In general, the images clicked from the Galaxy Note10 Lite were comparatively sharper.

Photos from the OnePlus 7T are more dramatic but lack clarity. When zoomed to 100 per cent, the image looks a little artificial.

Photos from the Galaxy Note10 Lite are brighter and have more clarity. When zoomed to 100 per cent, the image looks a little better than the one clicked from the OnePlus 7T.

The ultra-wide angle offered in the Note10 Lite captures more area thanks to the 123-degree field of view as compared to the 117-degree field of view offered by the OnePlus 7T. Additionally, you can record super slow motion videos and there is a dedicated mode for food photography. There are augmented reality stickers and emojis which you might find fun, but aren’t used widely by consumers.

Coming to portrait mode, the Note10 Lite was again better in capturing the edges of the subject as compared to the 7T. Also, just like the one in the ultra-premium version, you also get ‘Live Focus’ option with which you can tweak the amount of blur in the background.

While the image clicked by OnePlus 7T (left) has more contrast but less background blur, the image by Galaxy Note10 Lite (right) has more blur, which can be changed through an option in Live Focus feature

When it comes to shooting with night mode, both the phones delivered similar output but at times, Samsung was better than the OnePlus 7T. Both the phones offer shooting video in 4K/60fps quality and photos shot in the daylight do not have much difference as both of them perform well. While shooting random images in extreme dark, both the phones did not deliver the expected results.

However, unlike the ultra-premium model, the Lite version does not have ‘Instagram’ option, which lets users click photos and share them on the social media website directly. Also, it does not have Live Focus video. Additionally, you do not get S Pen gestures that are used to control the camera and toggle between different modes. Further, the images from the ultra-premium model are more refined and have higher contrast. This doesn’t mean that the camera on the Note10 Lite is bad; it is arguably the best camera in the Rs 35,000 - Rs 40,000 price segment.

No smartphone in this price segment offers S Pen, the one accessory that actually justifies the Rs 40,000 price tag of the smartphone. We know that the phone doesn’t have a metal back cover, and it has a dated processor but no other phone (except other Galaxy Note devices) comes with a Bluetooth-enabled stylus.

According to Samsung, 90 per cent of people who purchase a Note device use the S Pen extensively. Another reason that the company gave us to launch an affordable Note device is to bring S Pen to a wider audience. Though S Pen has limited usability but for people who take a lot of ‘groufies’ (or group selfies), have a habit to take down notes during meetings and conferences, send personalised texts and/or draw, this one accessory is very important.

The S Pen in the Galaxy Note10 Lite does not have all the functions, like zooming in/out and changing the modes, that were offered in the ultra-premium model but you can still take pictures, toggle between front and back cameras, jot down notes, make doodles & personalised texts, draw sketches and colour pictures. I think this makes the Galaxy Note10 Lite a one-of-a-kind offering in this price segment.

The Samsung Galaxy Note10 Lite has a 4,500mAh battery. For me, it lasted for a day and quite honestly, the run-time depends on a person’s usage. Samsung has provided three options: optimised, medium power saving and maximum power saving. You can choose one of them on the basis of your priority. If you want to get more power, use the ‘Optimised’ option and so on. In the box, you’ll get a 25W charger that fully juices up the phone in approximately an hour and 20 minutes.

If you prioritise a beautiful display, a better camera and S Pen, the Galaxy Note10 Lite is for you. With the Galaxy Note10 Lite, Samsung delivers what it promises -- a complete flagship smartphone experience in the Rs 35,000-Rs 40,000 price bracket. However, if you want a display with 90Hz refresh rate, raw power and clean Android experience, then the OnePlus 7T should be your choice. 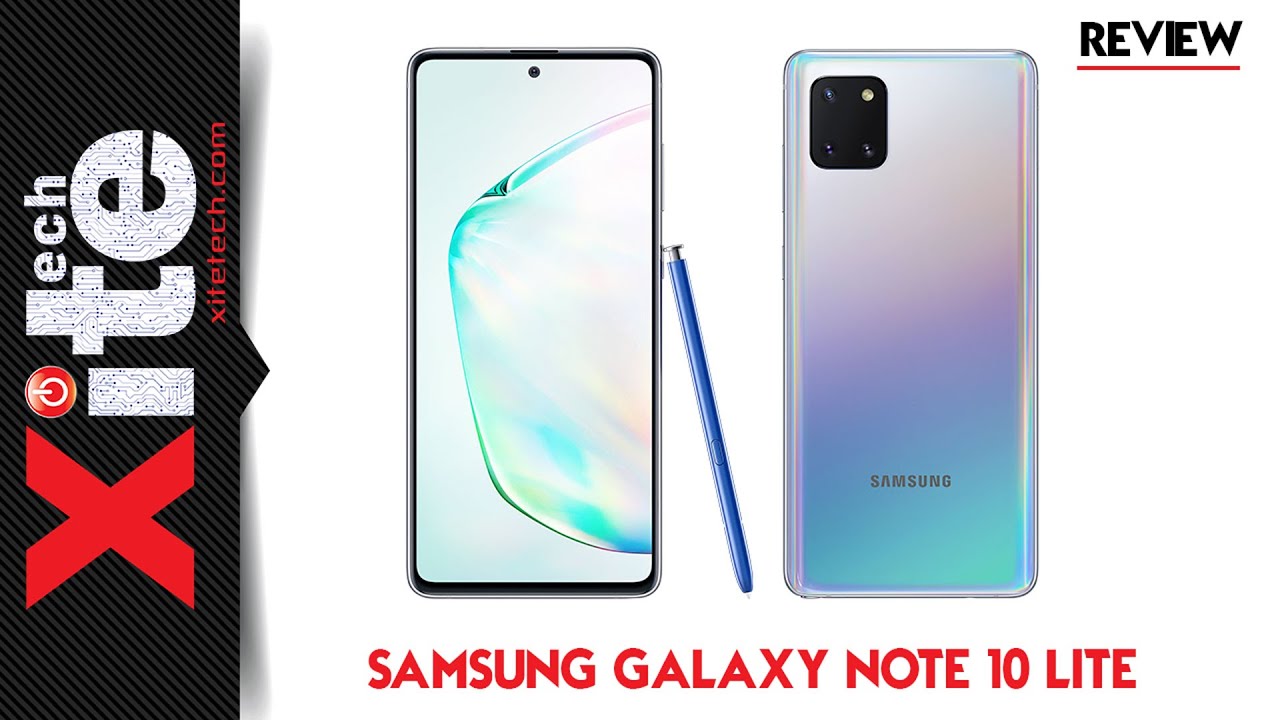